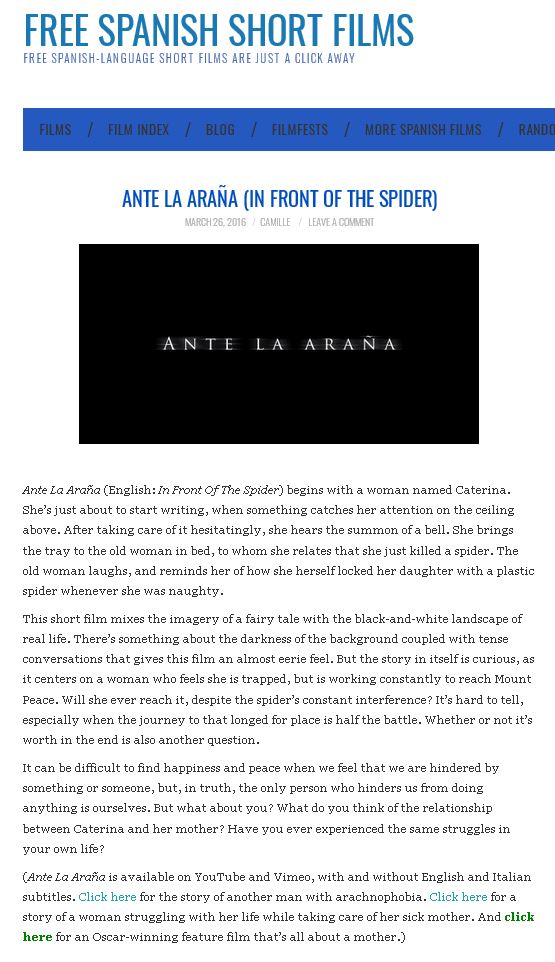 Ante La Araña (English: In Front Of The Spider) begins with a woman named Caterina. She’s just about to start writing, when something catches her attention on the ceiling above. After taking care of it hesitatingly, she hears the summon of a bell. She brings the tray to the old woman in bed, to whom she relates that she just killed a spider. The old woman laughs, and reminds her of how she herself locked her daughter with a plastic spider whenever she was naughty.

This short film mixes the imagery of a fairy tale with the black-and-white landscape of real life. There’s something about the darkness of the background coupled with tense conversations that gives this film an almost eerie feel. But the story in itself is curious, as it centers on a woman who feels she is trapped, but is working constantly to reach Mount Peace. Will she ever reach it, despite the spider’s constant interference? It’s hard to tell, especially when the journey to that longed for place is half the battle. Whether or not it’s worth in the end is also another question.

It can be difficult to find happiness and peace when we feel that we are hindered by something or someone, but, in truth, the only person who hinders us from doing anything is ourselves. But what about you? What do you think of the relationship between Caterina and her mother? Have you ever experienced the same struggles in your own life?

(Ante La Araña is available on YouTube and Vimeo, with and without English and Italian subtitles. Click here for the story of another man with arachnophobia. Click here for a story of a woman struggling with her life while taking care of her sick mother. And click here for an Oscar-winning feature film that’s all about a mother.)