Assumpta Serna won the Best Female Performance Award for her role in “Where you can’t reach” yesterday at the emotional gala of XVI International Festival of Social Cinema of Castilla La Mancha (FECISO).

Sixteen years ago, the International Social Film Festival of Castilla La Mancha (FECISO) elevates social cinema, committed and rebellious, to its maximum power to become the protagonist. The festival has already become a cinematographic event showing the most social side and trying to create a space for reflection in three locations: Toledo, Torrijos and Cuenca, from September 29 to December 1. 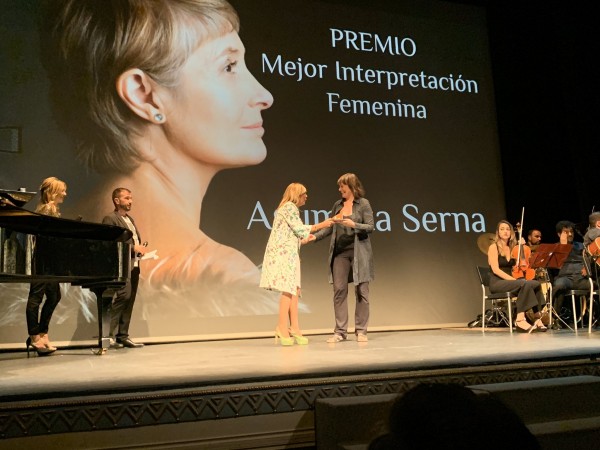 On this occasion, the Official Contest Section has received more than 1,000 films from all corners of the world reflecting the importance and interest of filmmakers in the more social part of cinema. In addition, the Film Festival will also award other tribute-prizes such as the prize A lifetime of cinema that this year falls to actress Verónica Forqué and the Solidarity prize that will be for Vicente del Bosque.

FECISO is celebrated during these days in Toledo with the support of the City Council and the Provincial Council of Toledo, the Ministry of Education and Culture and the Impulsa CLM Foundation. The awards ceremony was held on Sunday night at the Opening Gala that the social film contest held at the Rojas Theater in the capital of La Mancha.

Actress Assumpta Serna won the Best Female Performance for her role in “Where You Can’t Get”. María José Gallego congratulated Assumpta Serna for her deserved award and wanted to extend the congratulations to the rest of the winners, to the organizers of the festival directed by Tito Cañada and to those involved in this initiative, both those who star in the shorts and the films that are the soul and the heart of the festival, like each and every one of the people who make it possible for FECISO to be celebrated.

Finally, FECISO also wanted to highlight the work of the Association of Women Filmmakers and Audiovisual Media (CIMA) that fights for gender equality in the sector by awarding the Film Promotion and Dissemination Award.

In the brief intervention that the deputy of Health and Social Welfare made when delivering the award, highlighted the commitment of the International Social Film Festival of Castilla-La Mancha for “a committed, critical cinema and tries to remove consciences from an armchair and telling the social reality through a screen ”.

The FECISO takes place in Toledo from September 29 to October 11 and will continue its tour in Torrijos, from November 14 to 17, and in Cuenca from November 25 to 29.

In addition to the different projections and activities focused on social cinema, this year’s program of FECISO includes the pre-premiere in Spain of the movie «Rainy Day in New York» by Woody Allen that will be screened in Toledo next Monday 7 October.