“Ciudadanos” has won the First Foreign Fiction Mention at the 8th International Short Film Festival FIC ESMI. The projections were carried out from October 06 to 28, 2017. 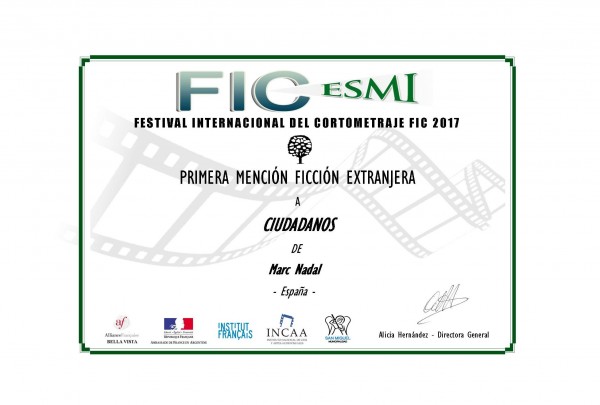 With or without cinemas, the FIC reaches more and more people, who accompany us on our itinerary. Nothing prevents us from reaching all kinds of public to spread good realizations. You only need a screen and the light goes out … The International Short Film Festival creates a true festival of cinema in the cities of Bella Vista, Muñiz and San Miguel; in order to promote works by filmmakers worthy of international recognition and new proposals of this particular facet of the seventh art.

It was conceived in 2009 by the French Alliance of Bella Vista, in order to offer a space for interaction between Argentine and foreign filmmakers, promote and reward young talents from the Seventh Art of the whole world, offer new proposals to the moviegoer public, perform tribute to the origins of cinema and remember, through the award statue ESMI (ESTUDIOS SAN MIGUEL INTERNACIONAL), to the large studios located in Bella Vista, where the most important productions and co-productions of Latin America in their time have been filmed .

CIUDADANOS TRAILER
The lack of jobs leads citizens into an emergency situation that pits them against each other. In the face of violence and injustice citizens like Noe suffer from the absence of effective laws.